Love is in the air with popular love songs from The Great American Songbook including music from Cole Porter and George Gershwin. The second half of the program will feature the cabaret stylings of Broadway actors Erin Stewart
and David DeWitt.
Program subject to change. 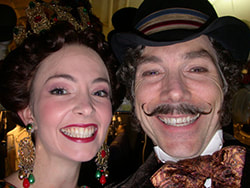 Born and raised in Alabama, I  spent most of my childhood working on a farm and calling my grandmother "Big Mama."

My life has been filled with music, color and some drama (including a stint working at a mental ward) and now..... I find myself doing what I love most: all of it. (Except the mental ward part.)

As a performer I've appeared as Monsieur Reyer in the Broadway National Tour of The Phantom of the Opera, where I toured most of the United States and much of Canada for nearly eight years. I've also appeared as Gus in the Broadway National Tour of Cats, Webber in The Last Empress at Lincoln Center, and as Javert in Les Miserables at Northern Stage. In 2016 I played Nate in Newton’s Cradle with the New York Musical Festival directed by Tony award winning actress/director Victoria Clark. Film and TV credits include the Make-up Artist in Woody Allen's Sweet and Lowdown, Michael in Under Shelter, Oscar in Outside the Window, Rusty in King's Day Out and Michael and Sammy in the Mary Tyler Moore TV series, New York News. I produced, directed and edited a short film- Dear Mr. Spielberg- which was screened at the Sundance Festival and my writing/directing skills have been showcased in multiple works performed at the West End Theatre in New York City.

With my wife, Erin Stewart, (who I met while performing with Phantom), we have developed an evening of music together- A Broadway Cabaret, including some of our favorite musical theatre tunes- old and new.

​I've been painting and illustrating professionally for over 25 years. My work has been seen at The Crawford Gallery, The Unframed Art Gallery, The Wired Gallery's Art Foray at Mohonk, and art fairs throughout the Hudson Valley and Manhattan. I continue to sell privately and also through Etsy.  My inspiration to paint comes from the desire to share images that I have found especially moving. I'm an observer and I try to reflect what I see. I think performing has helped me with this aspect. As an actor, you are constantly observing other people, yourself.... your emotions. It's the same with painting. I'm obsessed with the details.

Being a mostly at home Dad has also given me a fresh lens. My son inspires me daily which has resulted in blogging and more painting. And sometimes dance parties.
​
I write a monthly blog on art and fatherhood and my column, Daddy Debrief: Musings from a Hudson Based Dad, is published with the Country Wisdom News. I have also been a freelance writer with The Blue Stone Press. I live in Ulster County with my wife, Erin and our 6 year old son, Finn. He is by far my most favorite project to date.
Erin Stewart, Guest vocalist 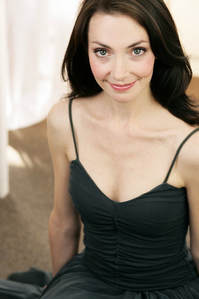 Erin grew up in Cincinnati, OH and was a member of the CCM Children's Choir and The Cincinnati Symphony Youth Orchestra, playing the oboe under the direction of Keith Lockhart. Her love for Julie Andrews and singing eventually won over reed making. She later attended Miami University (in Oxford, OH) and then earned her masters in vocal performance at the Manhattan School of Music.

Upon graduating, she joined the Broadway national tour of The Phantom of the Opera as an ensemble member and then made her Broadway debut with Phantom the following year. Erin rejoined the tour and covered the role of Christine traveling across the U.S. and Canada.
​
Erin appeared as Christine Dae in the brand new Vegas production of Phantom: Phantom- The Las Vegas Spectacular.  Erin was an original cast member in the Tony nominated, Broadway revival of A Little Night Music starring Bernadette Peters, Elaine Stritch, Catherine Zeta-Jones and Angela Lansbury directed by Trevor Nunn which ran from 2009-2011. She appeared as Mrs. Nordstrom and also performed the roles of Anne and Charlotte.

Erin sang in the premiere of the new Andrew Lloyd Webber revue, Now and Forever at the Marriott Theatre in Chicago in 2013 where she sang the North American premiere of the title song, Love Never Dies, as well as music from The Phantom of the Opera and The Woman in White. That same year Erin sang in a fundraising concert as the character Ruth for the Broadway show, Soul Doctor. Erin took part in a reading of the new musical Rebecca, as Clarice, directed by Francesca Zambello at Merkin Hall.

Regional credits include Eliza Doolittle in My Fair Lady with The Gretna Theatre, Sarah Brown in Guys and Dolls with The New Harmony Theatre, Anne in A Little Night Music with Opera Cleveland, Guinevere in Camelot at the Arts Center of Coastal Carolina and a regional premiere of Ed Dixon’s Fanny Hill as Phoebe with Kalliope Stage.  Other regional musical theatre credits include Mabel in The Pirates of Penzance, Maria in West Side Story, and the title role in Rodgers & Hammerstein’s Cinderella.

Erin has performed premieres, concerts, and recitals in such venues as Carnegie Hall, Avery Fisher Hall, Symphony Space, Merkin Hall, Gould Hall, Steinway Hall, the Liederkranz, El Museo del Barrio, and Yamaha Studios. Erin was the soprano soloist in a world premiere presented by American Opera Projects at Zankel Hall. Erin has performed with the Omaha Symphony as their soprano soloist in their Christmas concert, 'Christmas with the Symphony.' She has been a frequent soloist with members of the Manhattan Chamber Orchestra performing at Carnegie Hall, The Finger Lakes Chamber Music Series, and The Young Soloists Chamber Society of New York. In Osaka, Japan Erin sang nightly as the featured soloist for audiences of over ten thousand in The Wonder Christmas Show for Universal Studios. Erin was also a featured soloist in a concert at the St. Regis Hotel in New York City hosted by Paul Gemingani with guest artists Marin Mazzie and Jason Danieley.

Erin’s opera credits include Barbarina in Mozart’s Le Nozze di Figaro at Metro Lyric Opera under the baton of Anton Coppola, Nora in Riders to the Sea, Lauretta in Gianni Schicchi, and Nancy in Albert Herring. She was also a member of the Caramoor Young Artist Festival under the direction of Will Crutchfield.

Erin is an adjunct faculty member at SUNY Dutchess and maintains a private voice studio. She currently lives in Ulster County with her husband, David DeWitt and son Finn.

Learn more about Erin Stewart at her website, www.erinstewart.net.

make a night of it - Reserved seating

Pre-performance dinner at the Culinary institute

To complement this evening of stirring music, the CIA will open the Caterina de’ Medici restaurant for a special  pre-performance dining experience.  More information will be available as the event approaches.