sounds of the season - santa at the movies

The child in you will enjoy selections from March of the Toys, Miracle on 34th Street, Polar Express, and A Charlie Brown Christmas. You will then be transported to the stage with selections from Tchaikovsky’s classic The Nutcracker. Joining the orchestra for the second half of the program will be the combined vocal resources of the Rhinebeck Choral Club, and students from both Franklin D. Roosevelt and John Jay High Schools. The concert will conclude with the heartwarming standard White Christmas, three holiday songs from Home Alone, and Leroy Anderson’s iconic Sleigh Ride!​ Guest conductor - William Stevens.
Program subject to change. 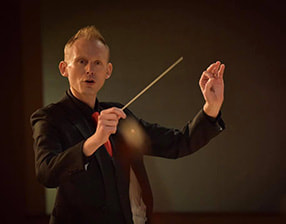 William Stevens is an active performer and conductor throughout the Hudson Valley. He is one of the band and jazz band directors at Union Vale Middle School in the Arlington Central School District in LaGrange, NY, with a middle school band program of around 300 students. William’s professional conducting experience includes 10 productions with the Admiral Players, principal conductor of the Hudson Valley Saxophone Ensemble, and guest conductor for the Northern Dutchess Symphony where he led the New York State premiere of the Scott Routenberg Concerto for Jazz Violin and Orchestra. He was also chosen as a conducting finalist for the Woodstock Chamber Orchestra (WCO) and was reviewed by Leslie Gerber of Hudson Valley One: “I have never heard the WCO sound as good as it did during this concert… Those of us who were in the audience were lucky to be there.”
​
William has been sought after as an All-County conductor and has lead groups in Tioga, Montgomery, Putnam, Orange, and Sullivan counties. He is currently the principal clarinetist for the Northern Dutchess Symphony Orchestra and the Greater Newburgh Symphony, and has performed in Europe and at Carnegie Hall with the New York Wind Symphony. William received his Bachelor of Music Education and Performance degree from SUNY Fredonia, and his Masters degree in Clarinet Performance from Ithaca college. He has studied conducting with Dr. Russel C. Mikkelson (former Director of Bands, SUNY Fredonia), Dr. Paula Holcomb (Director of Bands, SUNY Fredonia), Dr. David Rudge (Director of Orchestras, SUNY Fredonia), and Dr. Steve Petersen (former Director of Bands, Ithaca College). William lives in Poughkeepsie, NY with his supportive husband Chris and their adorable pug Jake.

Click the names below to learn more about our guest artists.
Cassandra leonard, director of the rhinebeck choral club

Cassandra Leonard began as the director of the Rhinebeck Choral Club in January 2014.  She sang with the Rhinebeck Choral Club from 2004 – 2011, and served as the Vice President for five years.  Since 2004, Cassie has been a vocal music teacher in the Arlington School District.  She is the Music Director for the Union Vale MS drama club and also directs the Select Chorus.  In December 2015, she was honored to present a session titled “Community Choirs- Who are the Singers in Your Neighborhood” at the New York State Music Association Winter Conference in Rochester, NY.  Cassie served as a board member and webmaster for the Dutchess County Music Educators Association from 2009-2018.  Cassie received a Bachelors of Music from Ithaca College and a Masters of Music Education and Choral Conducting from the Hartt School of Music. The Rhinebeck Choral Club is excited to be celebrating their 75th Anniversary this Spring.
Amy Martin, Choral Director at F. D. Roosevelt High School

Amy Martin is the Choral Director at F. D. Roosevelt High School in Hyde Park, NY.  Mrs. Martin studied vocal music at the Crane School of Music in Potsdam, NY and received her Master’s Degree in Curriculum and Instruction at SUNY Plattsburgh.  She has taught vocal music in Saranac Central Schools before moving to the Hudson Valley.  She taught chorus for seven years at Haviland Middle School, also in Hyde Park.    Mrs. Martin has performed with many theater companies throughout the state, and made her Carnegie Hall debut in 2012.  She has performed with several area groups, including Ars Choralis and the Olive Jazz Choir, and she has performed in several countries.  She has served as director, music director, stage manager, and choreographer for many productions in both musical theater and dramatic settings.
candice ruffalo, choral director at john jay high school

Candice Ruffalo is the choral director at John Jay High School where she teachers Music Theory, Advanced Placement Music Theory, Music Workshop and Intensive Instruction Music as well as directing the Mixed Chorus, Women’s Choir, and Chamber Choir. She holds a B.M. in Music Education and a M.M. in Choral Conducting from Ithaca College. She specializes in choral education and privately teaches voice, piano, and music theory. Throughout her 25 year career as a music educator, she has taught elementary, junior and senior high school choral music. She has been teaching in the Wappingers CSD for 22 years and has been fortunate to work with students from throughout the entire district. She has chaired Area All State Festivals, participated in numerous NYSSMA festivals,  and she is a member of The Amercian Choral Directors Association. Candice resides in Fishkill with the most amazing feline in the world, Killian, who is a published author. He is also the handsomest feline in the world. Ask him and he’ll tell you; he’s very modest.